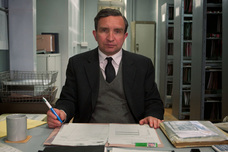 John May is a worker in the (fictional) Kennington Council. A shy and obsessively meticulous man, he has the unusual job of tracking down the relatives of those in the borough who die alone and without obvious friends. He is obsessed with ‘doing the right thing’ by the deceased, even to the extent of organising and- occasionally- attending their funerals. After 22 years in the job he is made redundant in the interests of ‘efficiency’: however, his last case takes an unexpected turn. A gentle, very British, film with which to start our new season.

‘Difret’ is an Amharic word with a double meaning: it conveys courage and daring, but it can also refer to the act of rape. Hirut is a 14-year schoolgirl who is abducted by a local gang, one of whom intends to make her his wife according to the ancient rural tradition of ‘telefa’, abducting girls for marriage. Although made illegal in Ethiopia in 1950 the law was rarely enforced. Hirut, and the female lawyer Meaza Ashenafi from Addis Ababa find themselves involved in a conflict between deep-seated cultural norms and the would-be social practices of a modernising African country. The story is based on a real-life case which rocked Ethiopia in the 1990s.

It is 1992, and there is a bloody civil war underway in Georgia. Many civilians have fled from the fighting, but two elderly farmers, Ivo and Marcus, have stayed behind to harvest their tangerine crop. Fighting in their village leaves two wounded men behind, and Ivo feels compelled to take them both into his home. Unfortunately they are from opposing sides- Nicko is a Georgian and Ahmed a Chechen mercenary. The resulting tensions as they recover have been described by one film critic as ‘engaging, intelligent anti-war story-telling’

Father Fabijan is a young priest taking over from his popular predecessor Father Jakov on a small island off the Dalmatian coast. He is disturbed to find that his ageing congregation is inexorably shrinking, as the death-rate outstrips the birth-rate. He suspects, correctly, that his flock are quietly disobeying the Church’s teaching on contraception. With the help of the island’s pharmacist and its newsagent, he sets about trying to reverse the situation. The results are not entirely what the young idealistic clergyman envisaged. A lightweight but enjoyable satirical comedy, it is based on a controversial play first staged in Croatia.

Craig and Irene Morrison are an octogenarian couple living quietly on their small coastal farm in rural New Brunswick. But Irene is starting to suffer from dementia, and Craig realises that their current house is too big and cold, and steep-staired, for their approaching needs. Being a self-reliant man with considerable skills he sets about building a more suitable home on his own land with his own materials. This triggers a conflict with local bureaucracy and planning regulations, and pressure from their adult children to consider other options (which Craig interprets as ‘Old People’s Home’). Essentially a sensitive and gentle geriatric love story, it is based on real events.

The final years of Leo Tolstoy’s life were marred by an increasingly bitter conflict between the Tolstoyan movement, and Tolstoy’s wife, the Countess Sofya, who wanted his inheritance to benefit her and Tolstoy’s family. The story of the struggle is seen through the eyes of Valentin Bulgakov, a young admirer of Tolstoy hired to be Tolstoy’s personal secretary  by Vladimir Chertkov, Tolstoy’s publisher and trusted adviser. It is Chertzkov’s plan that Valentin will act as his informer, but Valentin finds himself being used by both sides as a confidant and go-between. The battle ends in the heart of Russia, at Astopovo, the ‘last Station’ of the film’s title.

Another wry comedy from the director of Kolya, with some wistful undertones. Joseph Tkaloun is a 65-year-old school teacher in a stale and tired marriage with his wife of nearly 40 years. He leaves his job and looks for a new life, taking a series of lowly jobs until he settles on work in a Prague supermarket collecting and storing returned glass bottles (the ‘Empties’ of the film’s title). Much of the humour is self-deprecating: Joseph recognises that his daydream fantasies of sex and adultery are just that. The film hints at some Czech regrets for the passing of the old communist order, such as the loss of the local library to make way for a teeth-whitening business called ‘Happy Smile’.

In the 1950’s Germany was a country undergoing rapid economic recovery and anxious to put the memories of WWII behind it, in particular the Nazi horrors of the death camps. In 1958 journalist Thomas Grielka recognises the former commander of Auschwitz working as a teacher, strictly in breach of current German law. Johann Radmann, a young prosecutor, decides to investigate the case and finds himself in a tangled web of conspiracy, woven both by prominent institutions and government departments, to conceal the truth about the past. A dramatised account of a true story which culminated in the ‘Frankfurt Auschwitz Trials’ some five years later in 1963.

‘Big Crow’s Egg’ and ‘Little Crow’s Egg’ are the nicknames of two young brothers , Vignesh and Ramesh, who steal crows’ eggs to supplement their poor diet of rice and vegetables. They live in the slums of Chennai, in Tamil Nadu, with their mother and grandmother. Unable to afford school they earn a pittance scavenging coal. However, they have set their sights on buying a pizza from the newly-opened pizza shop on the outskirts of the slum area: unfortunately this symbol of the best in western food costs 300 rupees, way beyond anything they can afford. But they are a mischievous and resourceful pair and set about tackling the problem in ways which have far-reaching and unexpected consequences. An enjoyable film with a broad and subtle streak of social conscience.