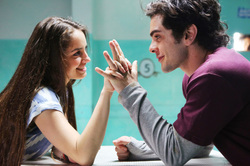 A hit-and-run accident on a wintry night is the starting point for this intriguing thriller about greed, class and social ambition. Dino is a small-time estate agent whose daughter Serena has a boyfriend Massimiliano, the son of wealthy hedge-fund manager Giovanni Bernaschi and his bored wife Carla. Dino uses this connection to social-climb and try and make some easy money. The entanglement of the two families over the six months prior to the accident is seen from three perspectives- those of Serena, Massimiliano and Carla. The all-important question is ‘who was driving the car on the night of the accident?’ 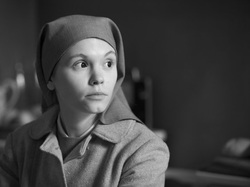 Anna is an orphan and a teenage novitiate nun living in a rural convent in the 1960s. She is on the point of taking her final vows, but before this irrevocable step she is told by the prioress of the convent that she should visit her remaining family. This turns out to be her Aunt Wanda, a former prosecutor of the post-war Stalinist regime, living in Gdansk. From her aunt she learns that her birth-name is Ida, and she discovers further unsettling facts about her childhood and the deaths of her parents. The film won an Oscar in 2015 for director Pawlikowski, and special praise for its unusual and outstandingly beautiful cinematography. 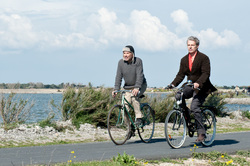 TV soap star Gaultier Valence visits retired actor Serge Tanneur, living in seclusion on the Ile de Re, to try and persuade him out of retirement to take part in a live performance of Moliere’s classic ‘The Misanthrope’. Valence sees himself in the leading role of Alceste, with Tanneur in the supporting part of Philinte. (The French title of the film is ‘Alceste a Bicyclette’). But Tanneur sees himself in the titular role, with Valence in support. To resolve the issue they agree to rehearse for a week, taking it in turns to play the two roles. In a mixture of friendship and rivalry the two egocentrics battle it out, the rivalry heightened by the appearance of a mysterious Italian divorcee.

Impecunious author Mathias Gold has inherited a large Paris apartment from his late father. He arrives in France from New York to take possession and sell the property. He is startled to discover a retired 90-year old Englishwoman, Mathilde Girard, in residence, along with her daughter Chloe. He is even more startled to discover that she has life-time tenancy guaranteed by the old French law of ‘viage’, and, incidentally, the right to charge him rent if he stays in the apartment. The subsequent manoeuvres of this unlikely trio to resolve the situation to their own advantage make an intriguing, amusing and thoroughly enjoyable story 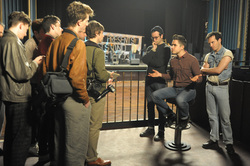 It’s 1984 and the miners’ strike is at its height. A group of London-based gay and lesbian activists decide to raise money to support the miners and their struggling families .They are also feeling the effects of a hostile government (although it was not until 1988 that Thatcher passed the notorious Section 28 of the Local Government Act- the first new anti-gay law in 100 years). Delivering the money in person to the miners of a small Welsh town- chosen at random- means a meeting of two seemingly alien cultures, but their coming together has some surprising, and often hilarious, results.

A BOTTLE IN THE GAZA SEA 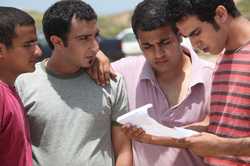 This is a love story with a difference. Tai is a 17 year-old Israeli girl living in Jerusalem, her parents having emigrated from France. Naim is a twenty year-old  Palestinian living in Gaza. Their romance is triggered by a message written by Tai and thrown into the Gaza sea by her brother, who is a soldier in the Israeli army. Although the physical distance between them is only sixty miles, the cultural and political barriers seem almost insuperable, and there seems little hope of any change for the foreseeable future. But an exchange of e-mail messages gives them hope that they might be able to exploit the connection with France. 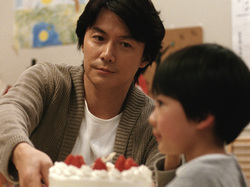 Ryoto Nonomi and his wife Midoni have a six-year old son Keita. They are a typical Japanese middle-class family: Ryoto is a hardworking successful businessman, and is a little disappointed that his son is somewhat timid and introverted. Yukari and Yudai Saiki also have a six-year old son Ryusei. They are a working class family: Yudai is an electrical handyman and runs a small shop, his wife works in a fast-food store. Along with his two siblings Ryusei enjoys a cheerful and fun-loving childhood. The two families are thrown together with the arrival of surprise news from the local maternity hospital, news which particularly challenges Ryoto’s character and beliefs. 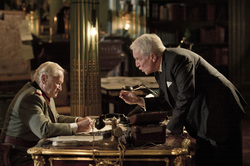 Paris, August 1944. As the allies advance through France, Hitler orders the German military governor of the city, Dietrich von Cholitz, to prepare the destruction of its most famous buildings and landmarks. Appalled by this possible act of wanton destruction, the neutral Swedish consul-general Raoul Nordling attempts to reason with von Cholitz. He hopes to persuade him to disobey the orders of his Fuhrer, even at the risk of savage reprisals to his family. The film is both an absorbing account of the developing relationship between the two men and a tense psychological drama. 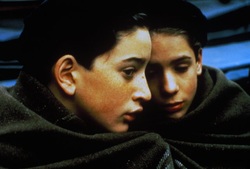 Upper class brothers Julien and Francois Quentin return from their school holidays to their catholic boarding school in the French countryside. Despite some initial hostility Julien befriends  new student Jean Bonnet. It slowly becomes clear that Jean is in fact Jewish and the priests are hiding him from the Nazis. An act of betrayal by one of the school servants leads the Gestapo to visit the school, and investigate the students and their teachers. A touching and moving account of the loss of childhood innocence, based partly on Louis Malle’s personal wartime experiences, and described by one critic as ‘his most beautiful movie and his last great one’.