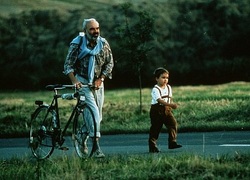 Louka is a cellist in pre-revolutionary Prague, making a slender living in a group providing background music in a crematorium. He enjoys his carefree bachelor lifestyle, with its choice of girlfriends. However, he becomes seriously strapped for cash and reluctantly agrees to be paid for a ‘marriage of convenience’ to a Russian woman, anxious to acquire a Czech passport. Almost immediately she ‘elopes’; Louka then discovers that he has also taken on her five- year-old son, Kolya. That neither can speak a word of the other’s language is only the first of his problems.

LOVE IS ALL YOU NEED 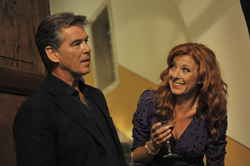 A remarkable change of style for Denmark’s famous director Susanne Bier. Described by one critic as a ‘subversive middle-life romance’ it follows the fortunes of Philip, a pompous widower, and sweet-natured Ida (recovering from cancer) as they make their ways to Sorrento to attend their respective childrens’ wedding weekend. Needless to say, the wedding celebrations do not all go to plan. Tensions between the bride and groom-to-be start to surface, and the various socially embarrassing situations are not helped by the outrageous behaviour of Philip’s sister-in-law. 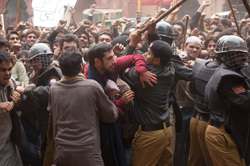 The film opens with Changez Khan talking to an American journalist in 2011.Working at Lahore university he is under suspicion by the CIA of being involved in the kidnapping of an American professor. In flashback to the year 2000 we follow Changez’s past career from a successful graduate of Princeton university to a popular high-flier with a Wall Street valuation firm. But all that changes with the 9/11 attack on the World Trade Centre. He realises that as a Pakistani he is no longer fully accepted and starts to question his life and motives. Can he find a balance between economic fundamentalism and religious fundamentalism?

THE WOMEN ON THE SIXTH FLOOR

Paris in the 1960s. Jean-Louis Joubert is a wealthy middle-aged stockbroker, living in bourgeois comfort in a stylish 19th century apartment with his neurotic socialite wife Suzanne. Their French maid is dismissed (for failing to cook M Joubert’s breakfast egg correctly) and a replacement must be found. It is fashionable to have a Spanish maid, and the Joubert’s learn that there are several such maids living in the sixth floor of their own building. Monsieur Joubert’s encounter with this colourful and lively clan makes him question his own tepid existence. Could there be more to life than stocks and shares? The world of both Jean-Louis and Suzanne will never be the same again.

Emily Taylor is reunited with her husband, released from prison after serving a sentence for insider trading. She is severely depressed and suffers emotional episodes and suicide attempts. Her psychiatrist, Dr Jonathan Banks, is persuaded to treat her with a new experimental drug for which he receives payment from the manufacturers. But this has complex and sinister side effects, and Dr Banks finds his practice and even his family life crumbling as matters spiral out of control. An intriguing and complex psychological thriller, with a twist-filled plot worthy of Alfred Hitchcock. 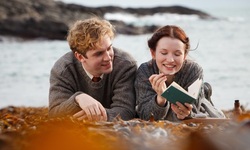 A true story about the Lamorna Group, a wild and bohemian colony of artists who settled in Cornwall at the start of the 20th century. One of its more flamboyant members, A.J. Munnings, (later to become president of the Royal Academy) is strongly attracted to newcomer Florence Carter Wood. She becomes both his pupil and his model. Gilbert Evans, the land manager of the Lamorna estate, also falls for Florence, and the scene is set for a tumultuous love triangle. Filmed entirely on the Cornish coast, it is a visually beautiful film but becomes haunting and heartbreaking as the Great War inexorably approaches.

Ila is a young Mumbai housewife who suspects her husband of having an affair. Hoping to win back his affections she lovingly prepares his daily lunchbox (dabba), guided by an unseen ‘Auntie’ living in the flat above. The lunchbox is then sent, along with thousands of others, to her husband’s workplace via a complex network of delivery-men (dabbawallahs). Although normally reliable, glitches can occur in this complicated system, and not all dabbas necessarily end up at their intended destinations. A gentle off-beat tale from one of India’s most vibrant cities. 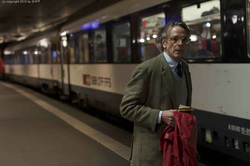 Raymond Gregorius is an ageing professor of classical languages in Switzerland. His boring and uneventful life is dramatically disturbed when he saves a young Portuguese woman from a suicide attempt. In the process he finds a book of verse by Portuguese poet Amadeu de Prado, and something in the writings speaks to his own thoughts and condition. He feels compelled to discover more about Amadeu and his two close companions, who struggled against the Salazar dictatorship in the 1960s. His impetuous journey to Lisbon starts him on a voyage of discovery, not only about the three Portuguese friends but also about his own life and character.

YOU WILL BE MY SON 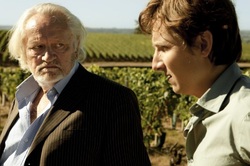 Paul Marceul is the proud owner of a prestigious vineyard in St Emilion. He is a domineering figure, passionate and demanding about his wine. He is disappointed in his son Martin, whom he feels lacks his own forceful and charismatic character. His trusted manager Francois also has a son, Philippe, working in the wine trade in California. When Francois is diagnosed with terminal cancer Philippe returns to France, and Paul Marceul sees in him all the qualities which he thinks his own son lacks. But can he engineer a change in the natural laws of succession? In the words of one film critic ‘Like a fine wine, this drama is full-bodied and complex’.