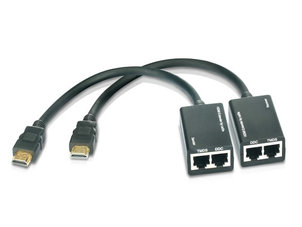 ‘When the Budleigh Film Society started three years ago it installed its equipment in the local public hall. The layout of the building dictated that nearly 40 metres of video cable were needed to link the DVD player to the projector. Although fairly satisfactory, this was susceptible to interference, particularly from an upgraded audio loop put in place last year.

‘The problem has been overcome by installing an ‘HDMI Extender’, which consists of two small low-voltage units: one by the DVD player which boosts its HDMI output, and one by the projector to attenuate the signal before feeding it to the projector’s digital video input. Although the total cost of the units was around £100 they are linked by low-cost Cat5 cable, which is considerably cheaper (and less cumbersome) than the alternative of three well-screened cables for analogue component video.

‘The all-digital HDMI link is giving us significantly better picture quality, much appreciated by our members. Also the units can handle signals up to 1080i/p, so we are ready, if or when the time comes, to upgrade to BluRay.’

With thanks to the BFFS